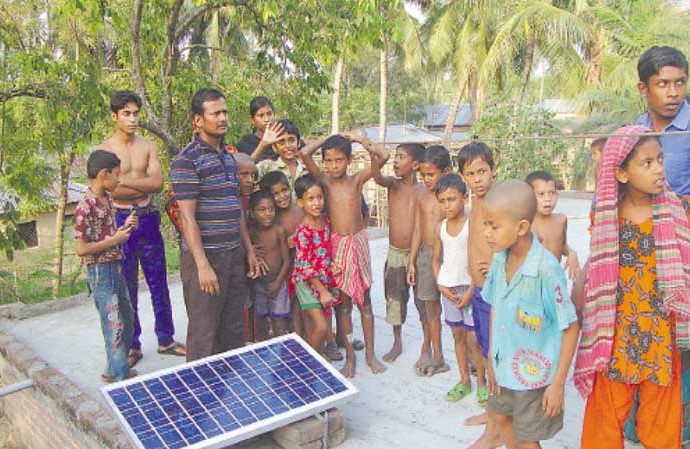 It can once more set the international standard for smart rural grids. As SOLshare’s motto goes: Create a network. Share electricity. Brighten your future

For nearly 50 million people in rural Bangladesh, access to modern electricity and lighting remains a distant dream. That’s about a third of the country’s entire population, not including yet another large part of the population still suffering from frequent load shedding and power outages.

Unfortunately, the dream of many of finally getting connected to the electric grid has little to do with receiving a good service.

In the last few years, the world-renowned Infrastructure Development Company Ltd (IDCOL) has brought solar home systems to more than 20 million Bangladeshis. These consist of small solar panels that are easy to install in rural households, providing enough electricity to charge a phone, run a fan, turn on a light or a TV for the evening hours. Often, in fact, these solar panels perform better than the country’s electric grid, despite their shortcomings.

Now a Dhaka-based Bangla-German company, ME SOLshare, has developed a new technology with the potential to unlock energy access for millions still in the dark.

Built on the past success of the solar home systems, this technology will improve the services for those with meager electricity supply — basically, through a peer-to-peer solar village nanogrid.

This new system allows households with or without solar panels to trade electricity with each other over safe, low-voltage nanogrids. These grids work the same way the electric grid functions: The main difference being that no centralised big power station is necessary to transmit power over hundreds of kilometres.

Instead, the grid is built from the bottom-up in each village by connecting existing solar home systems of which there are more than four million throughout the country.

The system works like a swarm of bees in that it is self-organised. This means that energy sharing across the nanogrid is not controlled from above. Rather, the energy sharing occurs through individual users deciding when they want to trade surplus solar energy and when they want to keep it. When a user’s solar panel is not working, through this system they can still access energy from other users. Like a swarm of bees, the system is resilient against external shocks. The nanogrid also results in more power for everyone, enabling higher electricity activities, such as grinding, milling, irrigation, or cooling.

The trading of electricity is facilitated by SOLshare’s proprietary smart electricity metre. The German Ambassador to Bangladesh, Dr Thomas Prinz, when asked about the project, explained it this way:

“This ambitious project demonstrates how innovative German companies can support the development of Bangladesh. By giving more people access to electricity this project addresses a basic demand of the rural population in Bangladesh. The more households join the grid, the better the allocation of electricity and the more reliable.”

The SOLshare approach is attractive to Bangladesh because it serves dense populations in remote village clusters while providing a high degree of energy security. The solar village grids reduce greenhouse gas emissions from existing infrastructure. Additionally, the nanogrids encourage demand-led private-sector investment in solar-photovoltaic generation, supporting other climate change mitigation activities. Each SOLshare nanogrid can stand on its own but will also be able to be integrated to the main grid when so desired.

The ‘Uber’ of the off-grid world — the business case

A technology may be all well and good – but without a solid business case and the right partnerships, it is unlikely to get very much off the ground. SOLshare is supported by the Infrastructure Development Company Ltd (IDCOL), which overlooks the country’s solar home system program.

The company is not only investing in a new technology, but also creating a new business model with a special focus on IDCOL’s partner organisations, who are SOLshare’s direct business partners.

The ability of households to earn an income from their solar systems through the nanogrid opens up innovative business possibilities. For instance, households could reinvest their profits from solar energy trading to upgrade their solar technology to generate even more electricity and thus, profit.

This surplus can easily be directly credited to their mobile money accounts. For its operation model, SOLshare has long been hailed as the “Uber” of the off-grid world.

Uber is an app for smartphones that allows customers to connect to drivers willing to offer a ride for a small fee. Similar to the car sharing company, SOLshare doesn’t own its fleet of solar home systems but still match makes and provides a payment platform for the efficient allocation of clean electricity in the country’s rural areas. It is a micro scale energy transition model, spreading renewable energy throughout the villages of Bangladesh.

Recently, ME SOLshare, along with its partners (IDCOL, UBOMUS, UIU/CER), was awarded the 2016 Intersolar Award for Innovation in the International Solar Industry. The Intersolar AWARD recognised SOLshare’s peer-to-peer solar village grid in Shariatpur as one of the globally outstanding solar projects that set a particularly inspiring example in driving the global energy transformation forward.

SOLshare is confident that after the country’s success with its solar home system, it can once more set the international standard for smart rural grids. As SOLshare’s motto goes: Create a network. Share electricity. Brighten your future.

Marooned by History in India and Bangladesh

How to foil a bank heist