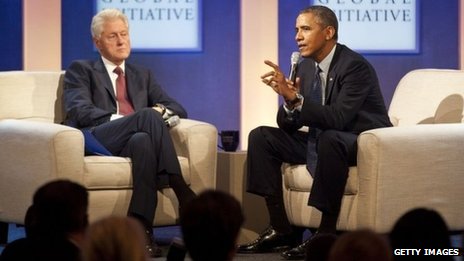 Bill Clinton and Barack Obama have had their ups and downs

Insurance companies have cancelled numerous policies that do not meet the law’s strict requirements, even though Mr Obama initially pledged otherwise.

Mr Clinton said his fellow Democrat should “honour” his commitment, even if it means changing the law.

In addition to the cancelled insurance policies, the federal website established under the law – which allows consumers to shop for private health insurance plans – has been plagued by glitches.

Mr Clinton campaigned for the Affordable Care Act, but now he is the latest politician to speak out against it.

“I personally believe, even if it takes a change in the law, that the president should honour the commitment the federal government made to those people and let them keep what they’ve got,” Mr Clinton said in an interview published on Tuesday.

The former president – who is a Democrat, like Mr Obama – did reaffirm his support for the healthcare law, though, saying: “The big lesson is we’re better off with this programme than we are without it.”

His comments come just days after Mr Obama apologised to those people whose policies have been cancelled under the his healthcare overhaul, now widely known as Obamacare.

“I am sorry that they are finding themselves in this situation based on assurances they got from me,” he said in an interview with NBC News on 8 November.

“We didn’t do a good enough job in terms of how we crafted the law,” he added.

“We’ve got to work hard to make sure that they know we hear them, and we are going to do everything we can to deal with folks who find themselves in a tough position as a consequence of this.” 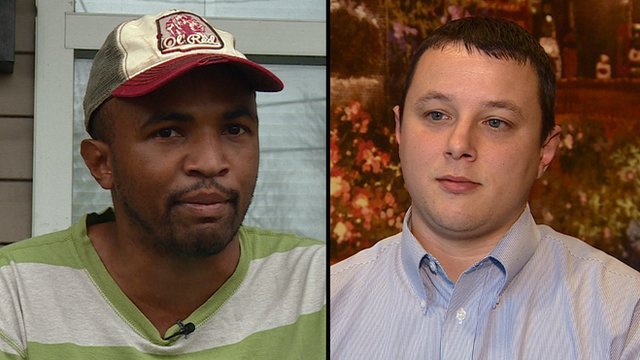 Residents of Kentucky, one of the unhealthiest states in America, share their hopes and concerns about the health law

“The president has tasked his team with looking at a range of options,” Mr Carney said.

Republicans – who have fought the president’s healthcare law at every turn – seized on Mr Clinton’s comments, claiming they “signify a growing recognition that Americans were misled”.

“The entire healthcare law is a train wreck that needs to go,” House Speaker John Boehner said, a form of words often-used in Republican attacks on the law.

“While the two parties may disagree on that point, it shouldn’t stop reasonable Democrats from working with us to shield Americans from its most egregious consequences – like the millions of current health plans being cancelled,” he added.

The House of Representatives is expected to consider Republican-sponsored legislation later this week that would allow consumers to keep their coverage.

The White House has said it is against that proposal, which would allow insurers to continue selling medical coverage that does not offer the level of benefits required under the law.

“Any fix that would essentially open up for insurers the ability to sell new plans that do not meet standards would create more problems than it fixed,” said Mr Carney.

Parties linked with terrorist acts must be banned: European Parliament