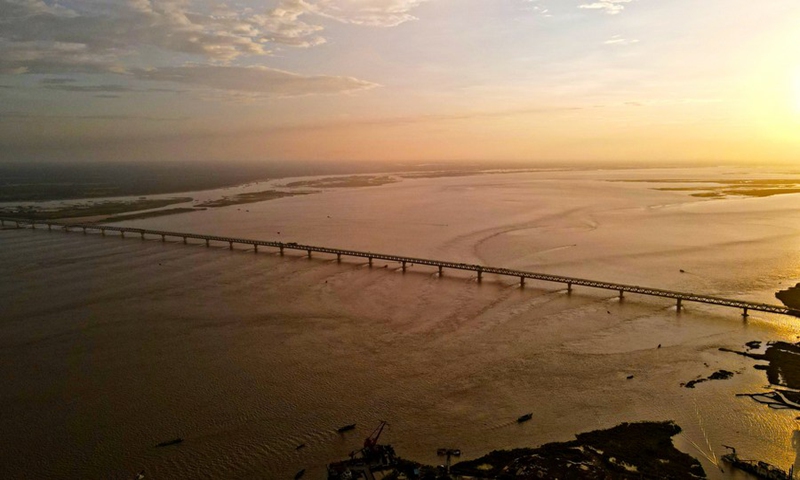 Aerial photo taken on Aug. 21, 2021 shows a view of Padma Multipurpose Bridge Project under construction in Munshiganj on the outskirts of Dhaka, Bangladesh. Photo: Xinhua

A number of Chinese-invested projects in South Asia have recently entered the delivery phase, as Bangladesh’s largest Padma Bridge opened to traffic on Saturday, showing what Chinese experts described as Chinese firms’ steady performance in project delivery when not facing political barriers and security risks.

The huge project, with a main bridge that’s 6.15 kilometers long, was undertaken by the China Railway Major Bridge Engineering Group Co, and it was the largest and most challenging infrastructure project in Bangladesh’s history.

Bangladeshi Prime Minister Sheikh Hasina said at the inauguration ceremony on Saturday that the bridge connects 21 areas from southern Bangladesh and is expected to increase the nation’s GDP growth rate by 1.23 percentage points and reduce the poverty rate by 0.84 percentage points a year, according to the Xinhua News Agency.

The bridge, as also a key part of the trans-Asian road network, will be a great booster to regional trade, Hasina said. 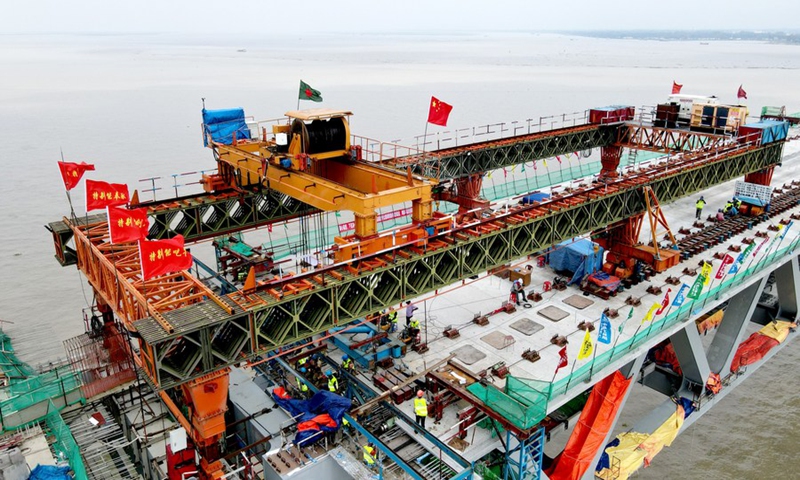 Photo taken on Aug. 24, 2021 shows a construction site of Padma Multipurpose Bridge Project in Munshiganj on the outskirts of Dhaka, Bangladesh. Photo: Xinhua

Bangladesh, which has a larger per capita GDP than India, is a major destination for overseas contracts by Chinese infrastructure companies, with Chinese companies signing 284 contracts with projects worth $13.17 billion as of 2020, data from China’s Ministry of Commerce showed.

On June 7, the communications tunnel in the two-lane, 2,450-meter tunnel beneath the Karnaphuli River, built by China Communications Construction Corp, was completed.

The projects that have been delivered in Bangladesh were accompanied by the delivery of a number of other projects in South Asia, which experts said is a testament to Chinese companies’ ability to deliver.

The project is expected to relieve more than 10 percent of a reported 6,500-mW power gap in Pakistan and generate enough power to meet the electricity demand of roughly 5 million locals.

On June 23, the third phase of a housing project in the Maldives, constructed by China Machinery Engineering Corp, was delivered, providing new homes for over 10,000 local residents.

Zhou Rong, a senior researcher at the Chongyang Institute for Financial Studies at Renmin University of China, told the Global Times on Sunday that the predictability of Chinese companies in delivering projects on schedule is demonstrated by these recent developments.

“Such predictability in generating concrete benefits to the local community is especially guaranteed when there is no political hindrance or security risks to the implementation of these projects,” Zhou said.