There will never be an East Pakistan again, but was this the kind of Bangladesh they gave everything for? 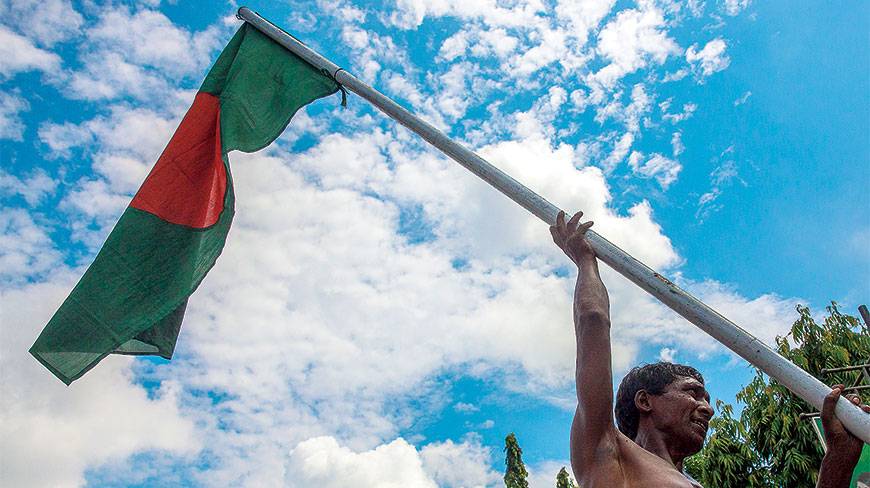 Narrow nationalism. Appeasement to religious power. An unwillingness to embrace new thinking. All combine to destroy our politics. Killing off or incarcerating a few elderly war-criminals is not going to expunge theocratic politics from the scene. It is not meant to.

It is too useful. The political elite thrive on the battles of generations past to divert the people from focusing on present problems. The question is: How long can one string along this agenda? One by one, political parties are imploding as biology catches up with once-evergreen leaders. A generational change is unfolding and uncertainty and instability loom.

A blast from the past

How ironic that a Bengali left-wing hero and a disgraced war criminal both pass away within days of each other. Both prominent in the volatile era of the 1950s and 1960s and instrumental in the events leading to the creation of Bangladesh. A clash of ideologies: Progressive nationalism, social transformation, with an eye to the East, versus a pro-Big Business, pro-Western orientation founded on the logic of religion and division.

Both Bhasha Matin and Ghulam Azam won and lost. The former saw the triumph of independence but he wanted “national liberation,” to see meaningful change in the lives of the majority.

Maybe not initially, but certainly ultimately, Azam and Jamaat wanted to retain the imperial construct of Pakistan, grounded in religion. That project died forever in 1971, but within seven years he and his ilk were welcomed back into the fold.

Ever since, there has been appeasement towards theocratic identity and orientation. Geography, culture, and secularism have faded in contrast.

What might have been? The heady days of the Jukto (United) Front in 1954. The great Maulana Bhashani saying “Assalam Alaikum,” or goodbye to “Pakistan.” True, there will never be an East Pakistan again, but then again, was this the kind of Bangladesh they gave everything for?

The Famine of 1974. The massacre of August 15. The left-wing rebellion of Colonel Abu Taher. His betrayal and hanging by General Ziaur Rahman. The end of secularism with the return of Jamaat. 15 years of failed military rule followed by over two decades of dysfunctional “democracy.”

What’s there to talk about?

A mature political class could instigate a rapprochement across bitter divides in the spirit of reconciliation. They could offer a project of national and regional development, benefitting the majority. Do you see that happening from the present configuration? This has to come from people not tainted by current allegiances. That means we have to place our hopes on new blood and the Next Generation.

That also means thinking beyond the limits of representative democracy, in its current format. This is not about choosing any particular political party. Neither is this about creating a new political party. That seems to be a dead end because the system is stacked against a politics which represent the interests of the majority.

It is great for the top 3% but not the educated Bengali middle class.

Could there be debate at a popular, grassroots level about what our social, economic, and technological options are? Profound questions about the 90 degree orientation towards Lahore and Delhi, rather than 360 degrees to all our next-door neighbours.

A re-education about geography where we learn what is happening in Myanmar, Assam, and China and how we can seize the opportunity. An analysis of how East Asia developed and how we could emulate them, within our own conditions.

A willingness to reach out to West Bengalis for historic, commercial, and environmental reasons, bypassing the parochialism of Mamata Banerjee. The Old Left is in inexorable decline in Kolkata, but a new progressive form will have to emerge.

It has to. We have to forget old ways of interference in the nationalist struggles in the Seven Sisters. We must not, however, deny their aspirations. We have to consider the formulae of “deep decentralisation” across districts, provinces, and states.

Here’s the thing: The Chinese economic juggernaut could be coming this way. At the moment, it is all about dreamy, big projects for Big Business, with no planning for how the majority benefit. It is taking place above our heads and there is no popular input about this. This is the Last Chance Saloon for this region.

While the Language Movement was taking off here, Korea was dirt-poor and way behind this region. Two generations later, we are still entrapped within the politics of that era. South Korea is now light years ahead in terms of prosperity with the infrastructure of a 21st century economy.

That reality check is painful and puts into context the current ambitions of the elite. Korea reached “middle-income” status several decades ago. We set ourselves very low goals.

The next generation, across all classes, creeds, young men and women, is aware. Many are unimpressed with what is on offer domestically, frustrated with the permanent impasse. Increasingly impatient for something that not only benefits the 3% but them, their families and their nation. They have been promised a digital future but the current conversation speaks the language of an analog era. If they want a future, they need to take control of a new conversation

BNP must work to distance itself from Jamaat: Canadian MPs

What goes out comes back