Call to save Bangladeshi rivers from slow death 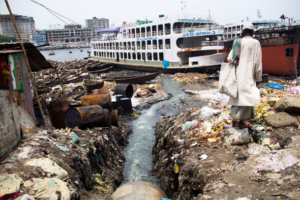 A man walks on the banks of the Buriganga River in Dhaka, a river that gave life to the city but now gasps for life due to massive pollution and illegal grabbing. (Photo: Stephan Uttom/UCA News)

Alarmed and aggrieved by dismal attempts to stop widespread pollution and encroachment, activists have called on the government to take immediate steps to save rivers in Bangladesh from a slow-burning death.

“We have had several landmark judgments from the High Court in the past years to save our rivers from devastating pollution and illegal encroachment, but not enough is being done to properly implement court directives,” Sharif Jamil, joint secretary of Bangladesh Poribesh Andolon (BAPA), a leading environmental group, told UCA News.

“Everyone concerned must realize that without rivers our existence will be at stake before it’s too late.”

The environmentalist reacted to a list of 49,558 grabbers of river and riverbanks and a government promise to carry on crushing illegal structures and start a massive dredging project for some 178 rivers across the country from next month.

The list of grabbers is incomplete and unacceptable as the actual number of grabbers must be much higher and it makes no sense on grounds that the demarcation process of major rivers was flawed and disputed, he said.

“Without proper demarcation, we cannot ascertain actual grabbers. These efforts seem more like a political ploy to gain popular support and to legalize many more financially and politically influential grabbers and polluters of rivers,” Jamil added.

Environmental groups will continue with their activism to put pressure on state authorities to act properly to save rivers, he pointed out.

The 2017-20 project, funded by Caritas Switzerland and the US State Department, aims to tackle the use of chemical pesticides on agricultural land in Bangladesh, India and Sri Lanka.

“Often we are concerned about industrial and organizational pollution of water bodies but not about ongoing harmful practices by individuals that pollute water sources. Bangladesh has one of the highest rates of chemical pesticide usage in agriculture, which washes out to canals and ponds and then into rivers,” Hossain told UCA News.

Based on extensive research, Caritas recently published a book on the project, which intends to discourage harmful agricultural practices and replace them with good ones and also to influence the government to improve policies to ensure protection of the environment including water bodies, he said.

Popularly known as the “land of rivers,” Bangladesh used to have more than 700 rivers but barely 405 exist today, including 50 shared with upstream India and some 139 rivers gasping for life amid endemic pollution and encroachment, noted the latest annual report from the National River Conservation Commission (NRCC).

Following a High Court order in 2009, the government formed the NRCC in 2014 to coordinate government efforts to save rivers from pollution and grabbing.

In another verdict in 2019, the High Court declared all rivers as legal entities and assigned the NRCB as their legal guardian.

Following the court order, the government launched a crackdown on grabbers of four rivers around Dhaka — Buriganga, Turag, Balu and Shitalaksya — as well as in the southern port of Chittagong.

Earlier, following another court order and years of dilly-dallying, toxic and hazardous tanneries, which contributed to massive pollution of the Buriganga for decades, shifted out of Dhaka.

Environmentalists allege that a lack of enforcement power makes the NRCC a weak body against a strong and politically connected business lobby behind river grabbers.

NRCB chairman Dr. Mizanur Rahman Howlader said the commission’s weaknesses in terms of finance and enforcement are being resolved through proposed amendments to existing laws, and efforts are underway to save rivers.

“We have visited all 64 districts in the country and coordinated for the list of grabbers of rivers and water bodies, based on various land survey records. This is not a final list, so there will be more lists in coming days. Crushing of illegal structures will continue, and rivers will be dredged to help them get back their navigability,” Howlader told UCA News.

“Prime Minister Sheikh Hasina is very sincere about protection of rivers, and she has ordered all the ministries to follow the long-term and strategic Delta Plan of the government and to ensure that development does not harm the environment and rivers.” 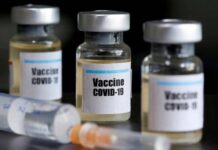 An election without opposition polling agents