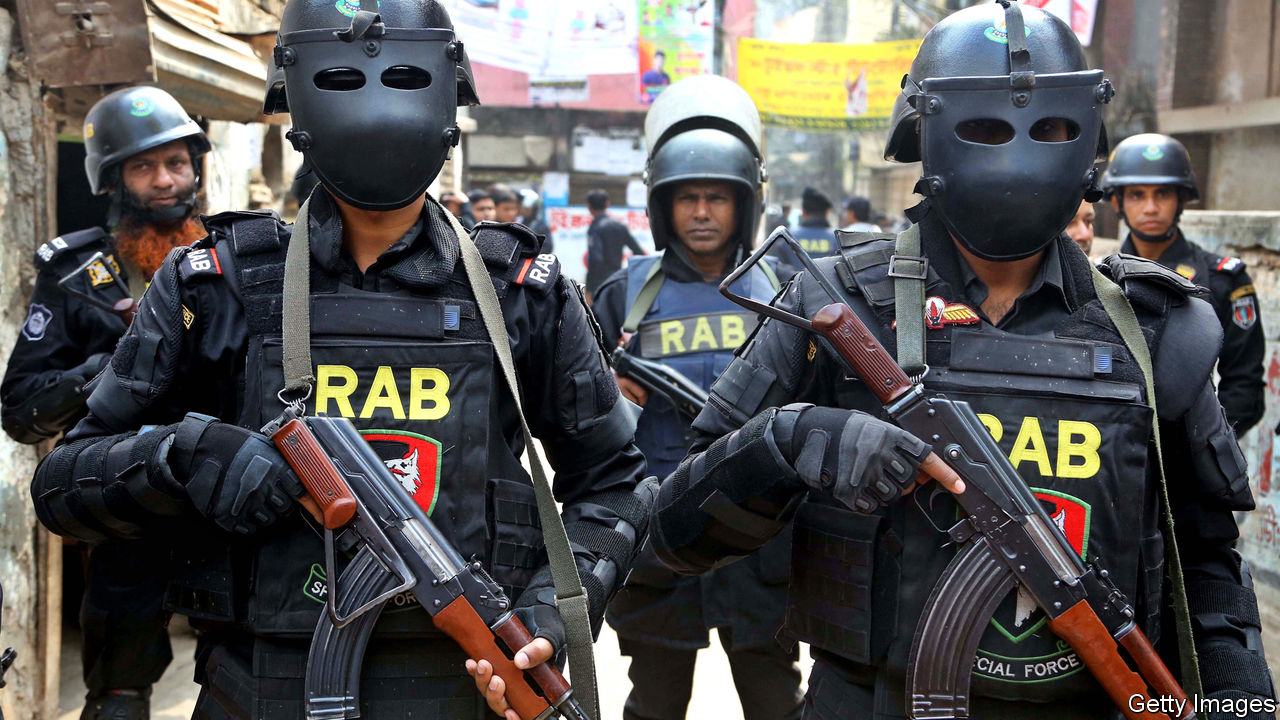 IT IS hard to see how the prime minister of Bangladesh, Sheikh Hasina Wajed, could lose the next election, which is due to be held by January 28th. The main opposition parties are in disarray—the product in part of a relentless barrage of lawsuits fired at them by Sheikh Hasina’s government. Yet in the run-up to the vote, the suppression of dissent is growing ever more ferocious.

The latest attack on critics is a bill regulating online publishing and social media, which parliament approved at the end of September. Its draconian provisions include prison terms of up to 14 years for those who spread “propaganda” about the war in 1971 in which Bangladesh won independence from Pakistan. (Sheikh Hasina’s father led the independence movement; she is so vitriolic about his opponents that she could be accused of propagandising herself.) Another vague clause bans the posting of “aggressive or frightening” content. Sheikh Hasina says the bill, which the president has not yet signed, is necessary to prevent the spread of radicalism and pornography, but journalists are terrified.

The assault on digital detractors follows an offensive against independently minded judges. In 2014 parliament approved an amendment to the constitution to make it easier for the government to dismiss judges. When the Supreme Court nullified the amendment last year, the government abruptly accused the Chief Justice, who was abroad, of corruption. He resigned without returning to the country. In September he published an autobiography accusing the prime minister’s party, the Awami League, of frequent attempts to intimidate judges.

The police also appear to be showing less respect for democratic niceties. A Philippine-style anti-drugs campaign earlier this year claimed almost 200 lives. All of the victims, according to the government, died while resisting arrest or when caught in crossfire. Yet a recording released by the family of one of them suggests he was shot while unarmed, with his hands tied, in the custody of the Rapid Action Battalion, an especially feared elite police squad. The opposition claims the government took advantage of the crackdown to bump off troublesome politicians, a charge the government vehemently denies. But even if the victims were all involved in the drugs trade, says Meenakshi Ganguly of Human Rights Watch, a pressure group, “It isn’t for the police or the government to decide innocence or guilt.”

The Awami League used to take turns in power with the Bangladesh Nationalist Party (BNP), the main opposition. The constitution said that a non-partisan caretaker government should supervise elections to guarantee fairness. But after one such caretaker government exceeded its mandate and extended its term, Sheikh Hasina amended the constitution to abolish them altogether, despite the BNP’s objections.

The BNP boycotted the subsequent election, in 2014, leaving it with no seats in parliament. Earlier this year its leader, Khaleda Zia, was jailed for five years for corruption. (Back when they used to alternate as prime minister, she and Sheikh Hasina were known as the two begums.) Her son, who has also been convicted of corruption, is trying to lead the party from exile in Britain. Several leaders of an Islamist party allied to the BNP, the Jamaat-e-Islami, have been executed for crimes committed during the war of independence, when it opposed separation from Pakistan. Others have been jailed. Neither party seems capable of mounting a serious challenge to the Awami League, even if they agree to participate in the election this time.

Most observers assume that Sheikh Hasina intends to win another term by hook or by crook, confirming Bangladesh as a one-party state in all but name. But that does not mean that discontent with the government will disappear; it may simply assume other forms. The neutering of Jamaat-e-Islami has led to the creation of a welter of new Islamist organisations, some of them radical. After a spate of grisly terrorist attacks on foreigners, gay people and outspoken secularists in recent years, the government has cracked down on violent Islamist groups. The bloodshed has since abated, but the extremist tendency that inspired it has not, according to a former member of the intelligence services: “If anything, it is growing.”