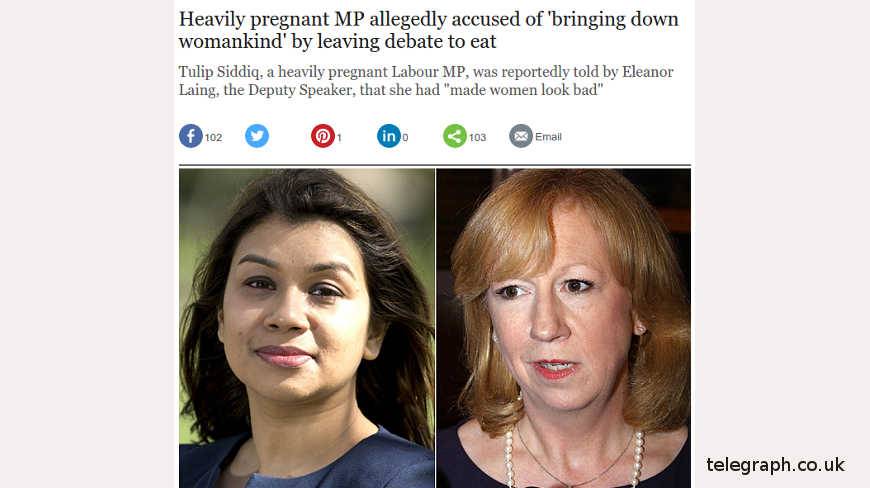 British media has scolded Eleanor Laing, deputy speaker of the House of Commons, over her comments on Bangladeshi-born Labour MP Tulip Siddiq, who is a heavily pregnant, due to leaving a debate to eat.

Quoting the Evening Standard, the Telegraph reported on Friday that Eleanor Laing told Tulip that she had “made women look bad” by leaving the Commons chamber after a debate on Universal Credit welfare reforms.

According to the report, Ms. Siddiq, who is seven months pregnant, arrived in the Chamber at 12:30pm on Friday before giving a speech at 2:30pm. She left to get food 15 minutes later, says the official records.

Speaking from the Speaker’s Chair, Laing said: “If one makes a speech in the Chamber, it is courteous and required by the rules of the House that one stays in the Chamber certainly for the following speech and usually for at least two speeches thereafter. The people who have not done so today know who they are.”

When she returned 45 minutes later Ms. Laing called her over.

One witness told the Evening Stanrdard: “Tulip apologised, she didn’t mention being pregnant, but Madame Deputy Speaker was annoyed and said, ‘Don’t play the pregnancy card with me’.”

They claimed that the Deputy Speaker added that “you’ve made women look bad” before allegedly saying: “People will think that women can’t follow the conventions of the House because they’re pregnant.”

She was then said to have told Ms. Siddiq: “You’re bringing down the whole of womankind.”

The spokesman added that if an MP needs to leave a debate before convention allows they can apply “privately to the chair to leave the Chamber”.

Visitors from 43 countries can get Indian visa online