Small investors affected by the 2010-11 share market debacle will need no guarantors to get loans from the share market refinancing fund formed for them by Bangladesh Bank. 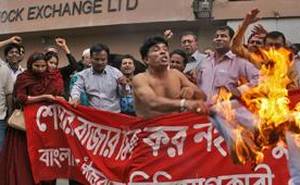 The process of disbursing the loans to affected investors would start after the Ministry of Finance approved the recommendations of the Bangladesh Securities and Exchange Commission (BSEC) in this regard, Deputy Governor of the central bank SK Sur Chowdhury said on Sunday.

He was talking to reporters after a meeting of the coordination committee of five regulatory bodies of the financial sector held at Bangladesh Bank.

Presided over by Bangladesh bank Governor Atiur Rahman, the meeting was attended by top officials of the BSEC, Insurance Regulatory and Development Authority (IRDA), Microcredit Regulatory Authority and the Directorate of Cooperatives.

On May 29 last year, the government approved the guidelines for the share market refinancing scheme of Tk 9 billion, setting an interest rate of 9 percent on loans for the affected investors.

Bangladesh Bank, BSEC, Investment Corporation of Bangladesh (ICB) had jointly formulated the guidelines. The ICB will oversee the scheme and its activities.

As per the guidelines, the affected retail investors, who had investment up to Tk10 lakh from January 2009 to November 2011, are eligible to receive loan from the specialized fund.

The small investors, affected during the period, will get waiver of 50 per cent interest on their respective margin loans, taken between January 2009 and November 2011 from merchant banks and brokers.

The affected investors will have the scope to pay the remaining interest through quarterly installments over a period of three years, as the remaining 50 per cent interest will be transferred to a block account.

Bangladesh Bank has already given Tk 3 billion to the ICB as the first installment.

On behalf of the merchant banks and brokerage houses, the ICB is currently disbursing loans to small investors against guarantors.

But adequate loans are not being sanctioned from the funds despite a high demand for it since most of the brokerage houses and merchants banks yet not accept the decision regarding the disbursement loans on behalf of the clients.

SK Sur Chowdhury said, “To overcome the problem, the BSEC has sent a letter to the finance ministry requesting it to approve the initiative to disburse loans to the investors without guarantors. We hope that the ministry will approve it. We (Bangladesh Bank) think that this provision of having guarantors to get loans should be removed.”