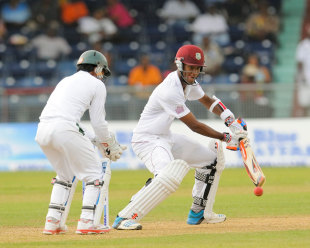 Kraigg Brathwaite’s quintessential Test innings, an unbeaten 123, directed West Indies towards early control of the first Test against Bangladesh at the Arnos Vale. A third rain break at exactly 5.00pm ended the first day’s play with West Indies 264 for 3.

West Indies lost a late wicket when Darren Bravo got out for 62 off 126 balls, just two overs before play was called off, getting too impish for his own good. He struck Taijul Islam for two consecutive fours over mid-off towards the end of the day but he tried to repeat the shot even after the bowler changed his angle and bowled around the wicket, resulting in a catch to Mahmudullah at mid-off.

But that was one of the few bright moments for Bangladesh on a day when they picked only three specialist bowlers and put West Indies in to bat on what looked like, and later proved to be, excellent batting conditions. It was enough encouragement for Brathwaite, who hardly dithered from his known and trusted method.

Brathwaite let Chris Gayle do all the scoring at first, before reaching his fifty in the second session. West Indies lost two wickets quickly but Brathwaite remained unfazed, again letting his partner, Bravo, get the boundaries. Brathwaite went after only those deliveries that were too wide or two full or both, and hardly anything troubled him, except a few missed flashes and the odd ball from Rubel Hossain that jumped.

When the opener hung back on his backfoot, the bowlers didn’t bowl full enough, and Al-Amin didn’t make him play enough, bowling a one-day line wide outside off stump.

Brathwaite reached his century off 219 balls, having struck eight boundaries at that point. He reached the three-figure mark through a full toss offered to him by Mahmudullah, which he slapped past cover for a boundary. This was reward for his patience. He was further rewarded on 113 when Mushfiqur dropped him off Shuvagata Hom when he got one to go with the around-the-wicket angle and kiss his outside edge.

Some credit was also due to the Bangladesh bowlers, especially the two newcomers. Taijul, the left-arm spinner, and Shuvagata, the offspinning allrounder, became the 72nd and 73rd Test players for the country, and they had an eventful first day.

The pair bowled the majority of the overs, picking up all three wickets. They looked lost at first, but soon they discovered the rewards of bowling proactively. They stuck to trusted lines, and gradually began to bowl like they would in domestic cricket.

Gayle’s wicket was Bangladesh’s first success of the match. Having made 61 before lunch, he added just three runs off 21 balls after the break, with the two newcomers muffling his strokeplay. Both attacked his off stump, either spinning in or leaving him slightly. Eventually he missed a sweep off Shuvagata, but umpire Marais Erasmus denied the loud appeal.

Mushfiqur took an extra second to call for the review, but it looked straight and the replays confirmed it had pitched in line, struck Gayle’s front pad in front of the stumps and was going on to hit middle stump.

Gayle had played very well in the first session, reaching his fifty off 60 balls. He threaded the off-side field well, taking every chance to pick up runs as his opening partner remained circumspect. He struck most of his boundaries in front of the wicket, and got to his 37th fifty with a six over wide mid-on off Taijul. He survived two chances in the first session: a run-out appeal that had him just reach the bowlers’ end to complete a second run. Just after reaching 50, Gayle was dropped by Rubel Hossain off his own bowling.

After Shuvagata dismissed Gayle, it was Taijul’s turn to take his first Test wicket. Kirk Edwards, batting at No 3 and under a bit of pressure after two low scores in the ODI series, attacked from the onset. He quickly got to 10 with a four and a straight six, but Taijul continued to toss the ball up, and took his leading edge in the 43rd over as he looked to work the ball against the turn. Mominul Haque took a sharp catch at silly mid-off, making it 133 for 2.

Brathwaite and Bravo added 128 for the third wicket, with very few deliveries threatening them. There was one from Rubel that reared at Brathwaite but he looked unbeatable outside the off stump. With the inexperienced attack fading in the final session, he got plenty of bad balls to get to his second Test century. Taijul started bowling short and Shuvagata gave away three full-tosses in his 19th over.

Mushfiqur would have wanted Rubel to bowl better too, with his preferred older ball. But apart from dropping Gayle and the odd good spell, his efforts never looked like they would get him a wicket. Bangladesh would have also liked Mahmudullah to bowl a lot better, but he went at over six an over and Mushfiqur could only get five overs out of his senior offspinner.