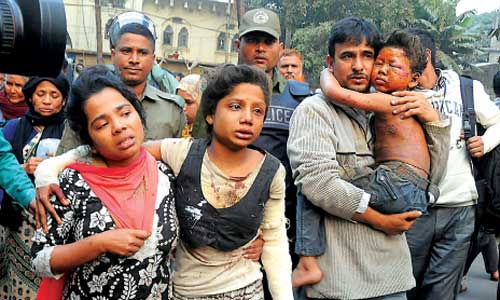 Wholesale arrests and alleged targeted killings by the law enforcement agencies, since they began a joint drive instilled fear and panic among anti-government protesters in their strongholds.
Anti-government protesters in at least 15 districts, particularly in Rangpur, Chapainawabganj, Tangail and Pabna told New Age they cannot stay at home at night.
They said that they had also put off their regular gatherings and scheduled meetings.
To avoid harassment and arrests, they said, they were spending nights at different places.
On January 15, joint force contingents comprising the police, the Rapid Action Battalion and Border Guard Bangladesh began drives against the anti-government protesters.
The government said that the intensified joint drives were launched to foil pickets’ bids to torch vehicles and uproot railway tracks that began on January 5 under nationwide non-stop blockade called by BNP and its allies.
The death toll reached 31 since the blockade began.
Industries minister Amir Hossain Amu who  chaired a cabinet committee
meeting on law and order Wednesday, later said 7,015 activists,  mostly of BNP and the rest of Jamaat were n arrested since January 6 in connection with arson attacks and other acts of violence.
‘We are scared since the government restarted targeted killings,’ said Jatiyatabadi Chhatra Dal joint general secretary Saidur Rahman Royel.
Until now, at least three opposition activists, two of them JCD leaders were killed in ‘gunfights’ since January 16 a day after the government launched joint drives.
Two of them were killed in Dhaka and one in Chapainawabganj.
Bullet ridden bodies of the victims were found after detective police had picked them up.
Panic gripped leaders and activists of BNP and its allies in the rural areas as ruling Awami League men began looting and smashing houses of the leaders and activists of the BNP-led alliance during joint drives by BGB, RAB and the police.
New Age correspondent in Chapainawabganj reported that at least 35 houses of opposition activists in three unions of Shibganj upazila were ransacked, torched and looted during the joint drive on the night of January 15.
‘With all the male members of the family away, during the joint drive, RAB and policemen entered and rampaged our house  smashing two television sets, refrigerators and set a motorcycle on fire,’ Hanifa Begum, wife of a BNP supporter Monimul Huq in Rasulpur village, Shibganj upazila told New Age Wednesday.
Monimul called it unthinkable that the law enforcement agencies would indulge in  such wanton acts.
‘My only fault is that I and my brother are with BNP, he said.
Sufian Ali, a resident of the same village, said that at least 31 houses of opposition the leaders and activists were ransacked during the joint drive with assistance from Awami League men.
Virtually no inhabitant can stay at home at night in several villages under Shibganj Municipality, and the neighbouring unions of Kansat, Shyampur and Shahbajpur.
Many of them sent young family members to relatives’ houses elsewhere in the district.
Shibganj police station officer-in-charge Moinul Islam refuted that the villagers’ houses were torched and ransacked during the joint drive.
He blamed supporters of BNP and Jamaat for
the acts to discredit the joint drive.
Chapainawabganj police superintendent Bashir Ahmed said the joint drive restored security and safety on the highway linking  Sonamasjid Land Port passing through Shibganj.
The first phase of the joint drive ended in 17 districts including Rajshahi, Rangpur, Gaibandha, Bogra, Dinajpur, Joypurhat and Sirajganj, said a senior office at the police headquarters in Dhaka.
The deputy inspector general of police coordinating the nationwide joint drive said that if needed combing operations would be conducted by encircling the target areas.
DIG operations at the police headquarters Abdullah Al Mamun told New Age that the drives by police were continuing in the districts to nab  ‘miscreants’.
When local police contingents take the needed assistance from RAB and BGB it  cannot be termed as ‘joint drive’, he said.
In Ranpur, habitants of Mithapukur and the nighbouring villages said that they were passing their days in fear and panic since the joint drive began in a sequel to five passengers losing lives in arson attack on a bus.
On January 16, police inspector general AKM Shahidul Hoque said the police would shed last drop of their blood to protect the elected government and stamp out terror unleashed by anti-liberation elements in the name of movement.
On Tuesday, prime minister Sheikh Hasina announced that her government would resist the ongoing opposition movement.
She asked party MPs to form ‘anti-terrorism’ and ‘anti-militancy’ committees in each district and upazila to resist ongoing violence, anarchy and check militancy.
Mohibullah Abu Noor, president of Juba Dal in Thakurgaon said that after holding demonstrations they go into hiding since the joint drives began.
Source: New Age