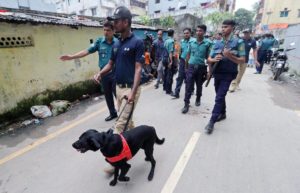 A woman who operates a tea stall in Bangladesh’s capital has filed a complaint in court against four police officers who, she alleges, vandalized her business and threatened to kill her unless she paid a bribe.

Maksuda Begum, 50, who sells tea on a footpath in Dhaka, alleges that four officers demanded 6,000 taka ($71) as a monthly fee and 4,000 taka ($47) as a bonus ahead of the Eid ul-Fitri holiday, then ransacked her stall and beat her when she refused, according to her lawyer.

“The court has accepted the case and has ordered the deputy commissioner of Dhaka Metropolitan Police (DMP) to investigate it and file a report by July 4,” attorney Mahbub Rana told BenarNews.

“Maksuda refused to pay them the amount as she could not earn much by selling tea in the month of Ramadan, for most of the people fast,” Rana said. “They vandalized her tea stall. They also threatened to put her in the crossfire for drug trading if she did not pay them the money.”

At least 134 people branded as drug dealers or addicts have been killed in what police have described as gunfights across the country since a government crackdown on narcotics began in mid-May. Four drug suspects were killed early Tuesday.

Police at the station mentioned in the complaint denied the allegations.

“We have yet to receive any order from the court. Once received, we will follow the court’s directives and file our investigation report,” Mahfuzur Rahman, the officer in charge of the Vatara station, told BenarNews.

“The allegations are false,” Rahman said, referring to the man named as the leader of the four officers.

Other complaints have been filed against police in recent days over the bloody crackdown on the drug trade.

On Sunday, Soma Begum filed a complaint against five police officers at Narsingdi district, 50 km (31 miles) northeast of Dhaka, alleging that officers implicated her husband in a drug-trade case because he had refused to give them a 200,000 taka ($2,364) extortion payment.

She also alleged that police threatened to kill her husband and coerced him to confess.

On May 31, at a chilling press conference in southeastern Cox’s Bazar district, the family of a local Awami League politician released four audio recordings, which, they said, captured the sounds of his extrajudicial killing and their conversations with him when he was in custody of the police who committed it.

The recordings allegedly captured telephone conversations that Teknaf municipal commissioner Akramul Haque had with his daughter and wife on May 26 as well as the apparent sounds of gunfire and groans of the dying man, according to the Daily Star, which reported the story.

Home Minister Asaduzzaman Khan Kamal said the recordings would be examined as part of an investigation into Akramul’s killing.

For his part, DMP Commissioner Asaduzzaman Mia said stern action would be taken if any police officer was found guilty of harassing innocent people as part of the continuing anti-drug drive.

PM eulogies Zillur for his role in restoring democracy

Gazipur to be city corporation