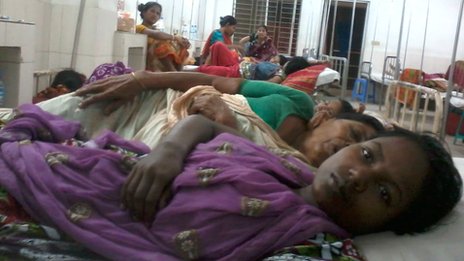 Merina Khatun, 21, was a sewing operator at a garment factory inside the eight-floor building which collapsed on the outskirts of Bangladesh’s capital, Dhaka, on Wednesday. Merina told the BBC Bengali service from her hospital bed that she had been trapped inside the rubble for four days.

“I was on the third floor when the building collapsed. All of a sudden, the roof came down. I was trying to run towards the stairs. But the roof came down so quickly, I sat down on the floor near a heavy machine, which helped me to stay alive,” Miss Khatun said in a quiet voice.

“My sister was also working in the same building, but she was rescued soon after the accident. But I could not come out, and another girl was killed as the building collapsed. I lived inside the debris with her dead body and a few other people [who had survived],” she added.

Miss Khatun had a small bottle of water with her, which soon ran out. She said some people started drinking their urine, but that she did not.

“One of my colleagues, who was also trapped and was with me, lost her mind and at one point she started to bite me, saying: ‘Take me to my son.’

“Every moment when I was trapped inside the building, I was waiting for death [to come]. Because there was no hope and the situation was so frightening, I was between hope and despair, between life and death. Sometimes it was even tough to take breath.

“I had a mobile phone with me, but there was no network. I was just lying down and during the first three days, I was conscious. But on the fourth day, I [lost consciousness],” she said, crying.

Asked why she entered the building on Wednesday despite believing the building was unsafe, Miss Khatun said the factory supervisors had threatened them and said those who did not go to work would not get paid.

“Many [workers] did not want to enter the building, and we engaged into an argument with the supervisors about the building’s condition,” she said.

She and her colleagues were also told the building’s owner had had the building checked by engineers and that nothing causing alarm had been found during the inspection, Miss Khatun added.

“After regaining consciousness, I found myself in hospital and I asked to see my parents.

“I thought the Almighty Allah had given me my life back when I saw my parents by my bedside.

“I had injuries to my head and waist, but the doctors say everything will be fine soon.”

Miss Khatun, who is single, said she and her sister were the main bread-winners for their family of six.

When asked about her future plans, Merina stated firmly: “No more garments. I will go back to the village [about 300km (185 miles) from Dhaka]. I know how to sew. I will buy a sewing machine and will try to do something on my own.”

SC Verdict: What if Ram temple was demolished in 1992 instead of Babri Masjid?

Why Is America’s Foreign Policy Still Punching Above Its Weight?

Bangladesh is burning, but does anyone care?