Police in Bangladesh have charged the owner of the Rana Plaza complex with murder over the building’s collapse in 2013, killing more than 1,100 people. 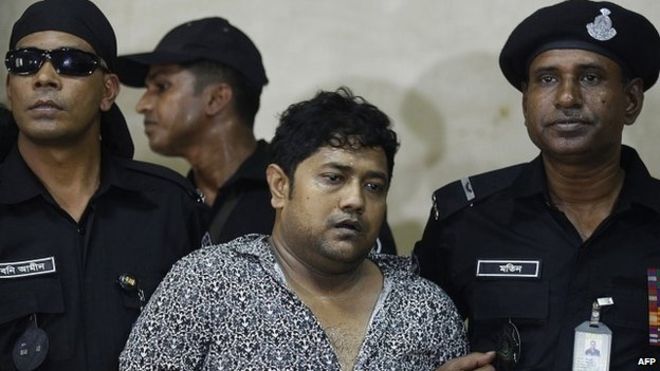 Sohel Rana and more than a dozen government officials are among 42 people to face charges.

They are accused of ignoring warnings not to allow workers into the building the day before it collapsed.

It was the worst industrial disaster in the country’s history – and prompted criticism of global retail practices.

The 41 people accused of murder, who include owners of factories housed in the complex and government officials, initially faced charges of culpable homicide.

Prosecutors say that the seriousness of the accident meant that the charges have been upgraded to murder. If convicted, defendants face the death penalty.

The prosecution says that Mr Rana should now appoint a lawyer ahead of the trial process. A court hearing is due to take place on 28 June to decide further proceedings.

The BBC’s Akbar Hossain in Dhaka

The fact that it has taken more than two years to bring formal charges in relation to the factory collapse has led to allegations that officers dawdled during the investigation process.

Questions have been raised about the government’s willingness to bring the guilty to justice.

But investigators argue that it has not been an easy task. They have had to record statements from more than 1,200 people including injured factory workers, government officials and experts.

Furthermore they have been under pressure from some politicians, officials and factory owners who have tried to hinder their investigation and prevent certain people from being charged.

What is happening now is unprecedented – no-one in the past has been punished for accidents at garment factories. But such is the seriousness of the disaster – it is alleged that the factory was a death trap – there is no way this case could have been ignored.

Public Prosecutor Khandaker Abdul Mannan told the BBC that the government’s permission was required to include the names of officials in the list of those charge, which he described as “a long procedure”.

Mr Rana was arrested days after the disaster as he attempted to flee to India.

The building code violation charges allege that three extra stories were added to the factory.

More than 2,500 people were rescued alive, some suffering from terrible injuries.

The disaster drew attention to the poor working conditions in Bangladesh’s garment industry, one of the world’s largest.