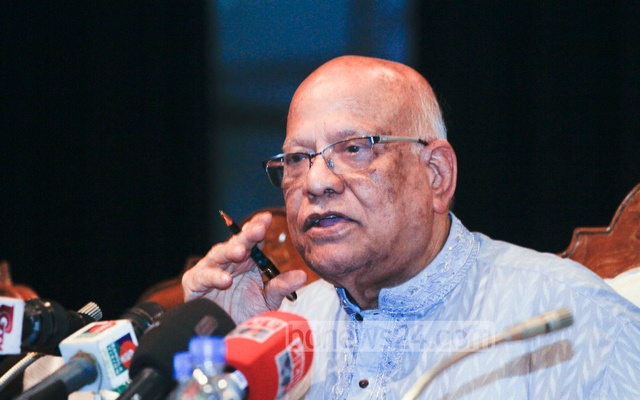 Finance Minister AMA Muhith has made it clear that the findings of the investigation into Bangladesh Bank cyber heist will not be shared with the Philippines.

“I don’t know whether they have asked for it. But we won’t give it to them even if they want it,” Muhith told reporters at the Secretariat on Sunday.

“It’s our internal report. It’s not something to share,” he added.

Earlier in the day, a Reuters report quoted Filipino Finance Secretary Carlos Dominguez as saying that Manila “strongly recommended” that Dhaka share the results of its investigation.

Muhith made his comments when asked what Bangladesh’s course would now be. He has not made the report public yet ‘for the sake of recovering the stolen money’.

Before facing the reporters, the finance minister met Law Minister Anisul Huq and Bangladesh Bank Governor Fazle Kabir, who recently visited the Philippines to expedite efforts to recover the money.

Reuters said the Philippines wanted the report of the investigation to ‘speed up recovery of the stolen funds’.

Cyber criminals tried to steal nearly $1 billion from Bangladesh Bank in February and made off with $81 million via the central bank’s account at the Federal Reserve Bank of New York.

That money was transferred to four accounts with false names at a branch of Rizal Commercial Banking Corporation (RCBC) in Manila before vanishing through casinos.

Bangladesh has recovered $15 million or a fifth of the stolen funds, returned by a casino junket operator.

A delegation led by the law minister recently visited the Philippines to discuss the recovery of the remaining money.

Muhith said the Philippines had seized $29 million following an order by the country’s Supreme Court.

“The money will be brought back gradually after discussions,” he said.

The finance minister is unhappy over the RCBC’s refusal to take liabilities for the cyber theft and to return the money.

“How can stolen money be a bank’s asset? Rizal Bank will have to return the money,” he asserted.

Muhith hopes the Filipino Supreme Court will also order a return of the $29 million seized money.

“It’s our money and we will continue our efforts to bring it back,” he said.

He held RCBC liable for the cyber theft.

“Rizal Bank is liable for the remaining money it took and they should pursue it. So we are not giving any importance to what it says. I think our position is correct and Rizal Bank has to admit it,” he said.

Asked what Bangladesh would do if the bank did not return the money, Muhith said “We have nothing to do. We may pursue with the government of the Philippines. They are with us.”

Bangladesh fared better than most of South Asia