More than 30 alleged drug dealers killed in the past week in ‘shootouts’ with police amid rights activists’ warnings.

Bangladesh‘s security forces have killed more than 30 alleged drug dealers in gun battles over the past week with right activists warning a campaign of extrajudicial killings may be under way.

The suspects were killed across the country under similar circumstances since the nationwide crackdown on the narcotics trade was launched in early May, Al Jazeera discovered from police reports.

In most cases, local police and members of the elite Rapid Action Battalion (RAB) force acted on tip-offs, raided houses where alleged drug traffickers operated, and after coming under fire engaged in deadly “shootouts”.

Some relatives of the deceased, however, say their family members were picked up by police and later shot dead.

Criticising the deaths, Bangladeshi human rights activist Sultana Kamal said at a press conference on Monday that arrests should be made and suspects tried before a court, but that is not happening.

“People do not want to witness such killings. It is a violation of law to use the firearms, bought by the people’s money, in extrajudicial killings. What is the country’s judicial system for, if the law enforcers themselves try to serve justice?” said Kamal.

According to the Department of Narcotics Control of Bangladesh, there are at least seven million drug addicts, of which five million are hooked on methamphetamine.

On May 14, RAB Director-General Benazir Ahmed told a press conference a “stronger stance” would be employed to prevent drug abuse.

Ahmed said police cases through the courts “would be less encouraged … due to backlog. These cases normally take a lot of time to get processed”.

Thirty-three alleged drug dealers have now been killed in “gunfights” with security forces across the country since the operation began.

RAB’s mobile court also sentenced 2,471 people, of whom 347 were drug dealers and the rest drug addicts. Police said more than 500 people had been detained over the same period.

Parallels have already been drawn to the situation in the Philippines, where its President Rodrigo Duterte declared a war on drugs, with his security forces killing thousands of drug dealers.

Human rights activist Nur Khan Liton told Al Jazeera “this killing spree” in Bangladesh is similar to what is happening in the Philippines.

He urged the government to properly investigate each death so “under no circumstances, such extrajudicial killings are accepted”.

Minister of Home Affairs Asaduzzaman Khan defended the anti-narcotics drive on Monday, saying Hasina instructed his ministry to take a “zero tolerance” policy against the drug trade to stop it “at any cost”. 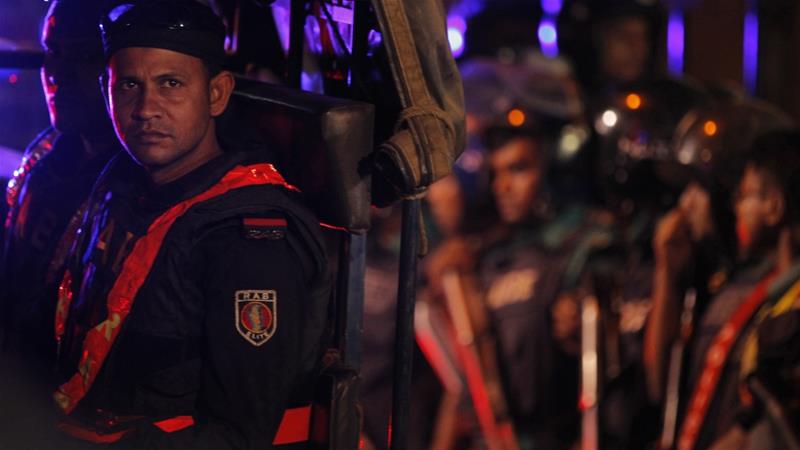 Lobbying on for vital posts