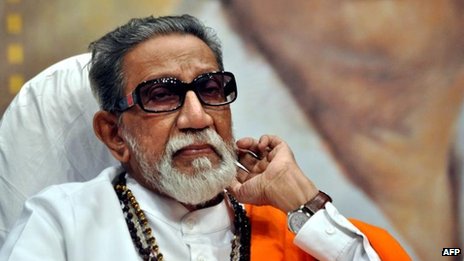 Bal Thackeray was known for his fiery rhetoric

Hindu fundamentalist politician Bal Thackeray, the founder of the right-wing Shiv Sena party, has died in Mumbai at the age of 86.

Mr Thackeray was blamed for inciting tensions between Hindu and Muslim communities during the 1993 Mumbai riots in which about 900 people died.

His fiery rhetoric made him one of India’s most controversial politicians.

The Shiv Sena was founded to keep South Indian migrants out of Maharashtra state and to halt the spread of Islam.

Party workers have gathered outside Mr Thackeray’s house and security has been stepped up.

He had been in poor health for some months. His health deteriorated further on Wednesday.

His funeral and cremation will take place on Sunday.

A cartoonist by trade, Mr Thackeray formed the Shiv Sena in 1966. Over time, the party acquired a reputation of promoting religious and ethnic chauvinism while allegedly targeting minorities, especially Muslims.

In 2002 and again in 2008, he called on Hindus to form suicide squads to attack Muslims.

A government inquiry into the riots in Mumbai in 1992 and 1993 blamed Shiv Sena members and several party leaders for taking a major role in organising attacks on Muslims.

Mr Thackeray was never convicted of any offence in connection with the riots.

He denied being anti-Muslim but said he was fiercely opposed to those who were pro-Pakistan.

“Only Marathis [residents of Maharashtra] have the first right over Mumbai,” Mr Thackeray wrote last year in the Shiv Sena newspaper.

Last month Mr Thackeray was unable to attend a party rally but addressed it through a video message.

The Pandemic Is Turning the Natural World Upside Down

Bad News Wrapped in Protein: Inside the Coronavirus Genome

P5 Plus 1 – Iran Nuclear Deal: What It Means for India