Asia-Pacific leaders meeting in China have agreed to move towards a new free trade zone strongly backed by Beijing.

The Free Trade Area of the Asia-Pacific (FTAAP) is seen by some as a rival to a US trade pact, which excludes China.

The Apec summit near Beijing agreed to launch a study into the FTAAP.

Chinese leader Xi Jinping, who earlier urged Asia-Pacific nations to accelerate economic ties, described the endorsement of the pact as a “historic” decision.

The US is currently negotiating a separate Trans-Pacific Partnership (TPP), which is considered part of Washington’s “pivot” towards Asia – ensuring continued US influence in the region in response to growing Chinese power.

The TPP involves 12 countries, but not China or Russia.

Mr Obama has rejected suggestions by Chinese commentators that the TPP is a way of countering Chinese influence.

In an interview with China’s Xinhua state news agency, he said the US was in no way trying to contain China. 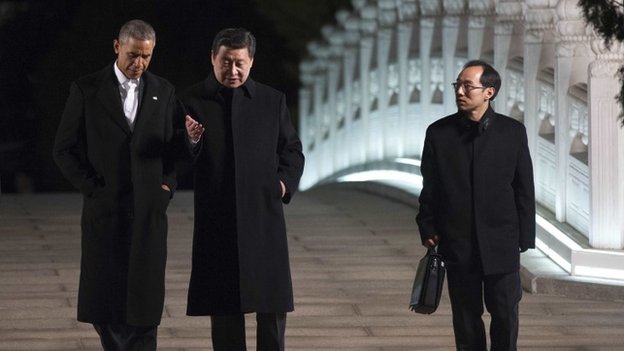 In its final communique, Apec – the 21-nation Asia-Pacific Economic Co-operation forum – said the study into the establishment of the FTAAP would last two years.

“Facing the new situation, we should further promote regional economic integration and create a pattern of opening up that is conducive to long-term development.”

“When the US and China are able to work together effectively, the whole world benefits,” Mr Obama said. 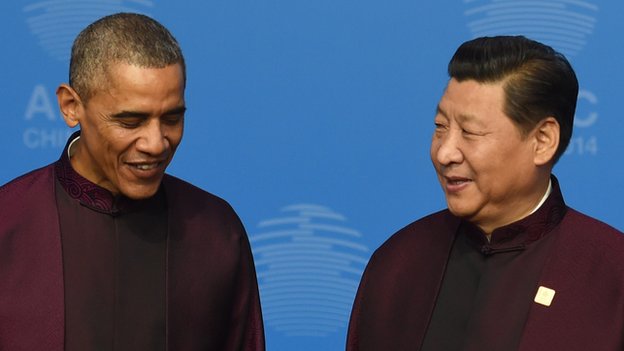 Free Trade Area of the Asia-Pacific

Separately, the US and China said they had made a “breakthrough” on eliminating tariffs on their technology products.

US Trade Representative Michael Froman told reporters in Beijing that the deal could lead to the “swift conclusion” of wider talks on global cuts in technology tariffs. This could lead to a drop in the price of products such as GPS devices, semiconductors and medical equipment.

Mr Froman said the agreement in Beijing “shows how the US and China work together to both advance our bilateral economic agenda but also to support the multilateral trading system”.

On the sidelines of the summit, Australian PM Tony Abbott met Russian President Vladimir Putin to discuss the downing of the Malaysia Airlines plane in eastern Ukraine in July.

Australians were among the 298 people who died on Flight MH17. Western nations say it was caused by a missile fired by pro-Russian rebels. Moscow says Ukrainian government forces were responsible.

Kremlin spokesman Dimitri Peskov said the two leaders had agreed on the need for a genuine investigation into what happened.

Dream sours for workers in Singapore

Why Asia should worry about Zika too