The leaders of China and Japan have met for formal talks after more than two years of severe tension over a territorial dispute.

Their first meeting included a public handshake with little sign of warmth.

In a speech to Apec, President Obama has meanwhile announced big changes to visa arrangements with China.

Multiple entry short-term visas for businessmen and tourists will be extended to 10 years – up from one year.

Those for students rise from one year to five.

Mr Obama also stressed the importance of ties between China and the US, saying “the US welcomes the rise of a prosperous, peaceful and stable China.”

His comments come amid underlying tension between the US and China over Beijing’s growing regional influence.

Today’s face-to-face meeting with Shinzo Abe is important progress in relations between the world’s second and third largest economies.

But the underlying disagreements over territory and history remain as bitter as ever. And even Mr Xi’s body language at today’s meeting was calculatedly icy.

During the handshake he did not smile or respond to Mr Abe’s attempt at conversation.

For all the fireworks and group photographs, this summit brings together neighbours with different worldviews at a difficult moment in history.

Relations between China and Japan have long been soured by a row over islands in the East China Sea.

The uninhabited but strategically important islands, known as Diaoyu by China and Senkaku by Japan, are controlled by Japan but also claimed by China.

Tokyo’s decision to purchase three of them from their private Japanese owner in September 2012 led to an escalation in a dispute that has rumbled quietly for years. 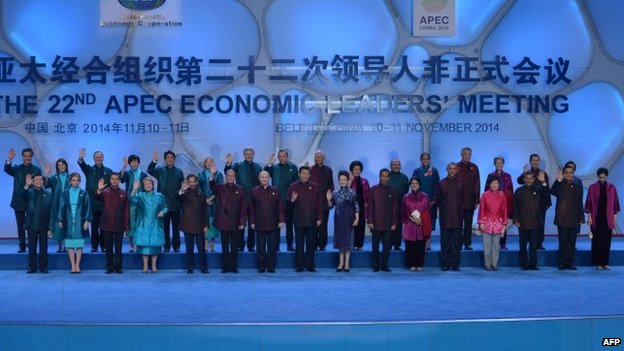 Trade is at the heart of the two-day summit

The Chinese and Japanese leaders interacted awkwardly as they posed for an unsmiling photo after their talks.

Mr Abe said the meeting – which came three days after the two sides agreed to work to prevent the territorial dispute from escalating – was “the first step for improving ties by returning to mutually beneficial relations based on common strategic interests”.

He also said they had agreed to start preparations to establish a maritime crisis mechanism.

There have been fears that a clash – accidental or otherwise – between Chinese and Japanese paramilitary vessels patrolling waters around the disputed islands could trigger a conflict.

Relations have also been hampered by what China sees as Japan’s failure to adequately acknowledge its war-time conduct.

Rupert Wingfield-Hayes looks at the dispute over the islands

Leaders from the 21 Apec member-nations are in Beijing for two days of talks.

Apec, which includes 21 Pacific Rim nations, includes 40% of the world’s population, with member countries accounting for about 44% of global trade and more than half of global economic output.

The summit takes place as China looks to underline its growing status as regional leader and economic giant.

It is the biggest event hosted so far by Mr Xi, who took over the Chinese presidency in March 2013, and trade is one of the top priorities.

In other summit developments:

KL arrests over 750 Bangladeshis in 3 days