A heavy crackdown on antigovernment protesters in Bangladesh has been fueling anger and fear within the country’s opposition movement, creating an opening for militant extremism to take root here, rights advocates and others say.

More than 100 people have died since January, when supporters of the main opposition Bangladesh Nationalist Party and its ally, the Jamaat-e-Islami, took to the streets to call for early elections. Police have arrested thousands of activists and banned the opposition groups from holding demonstrations. The opposition has defied that ban, leading to clashes across the country.

As police respond to the violent protests with tactics that critics allege include stifling political speech and carrying out extrajudicial killings, rights advocates fear that militant groups could be better positioned to attract new recruits from among embittered opposition sympathizers in this country long known as a bastion of moderate Islam.

“If democracy is undermined, militancy could rise,” said Shahdin Malik, a civil-rights lawyer in Dhaka. “There is very little political space for dissent right now.”

The government denies that it is curbing political speech or carrying out extrajudicial killings.

Mohammed Nasim, a senior minister who often acts as a government spokesman, said the administration would allow “peaceful and democratic” political activities but would crack down on “anarchy and terrorist activities”.

“If all avenues of political discourse are closed, Islamist parties that are part of electoral politics here could renounce the political system and become our Taliban,” said Badiul Alam Majumdar, the secretary-general of Citizens for Good Governance, an advocacy group that campaigns for transparency in government. “Militant groups from outside could also take advantage of the upheaval,” he added.

In recent weeks, police have announced the discovery of several weapons caches they say are linked to the Jamaat’ul Mujahideen Bangladesh, a banned militant group blamed for a series of bomb attacks on courts, cinemas and malls in 2002. They fear the group could be making a comeback, after India late last year arrested several people who its police said were JMB members following an explosion in a state bordering Bangladesh.

Ms. Hasina scrapped a provision in the constitution that required an interim government to take over during elections. The opposition then boycotted the polls, accusing Ms. Hasina of authoritarian tendencies. Opposition groups have called on her to step down and allow new elections.

For her part, Ms. Hasina has referred to BNP leader Khaleda Zia, as a “terrorist,” and her aides have compared the BNP, which has long been regarded as a centrist political party, with the militant group Islamic State for trying to impose a nationwide blockade of road, rail and river transport to press its demands.

The government alleges the BNP and its allies are responsible for a series of firebomb attacks on vehicles that have killed more than 60 people. The opposition groups deny the allegation and say they have only acted peacefully. 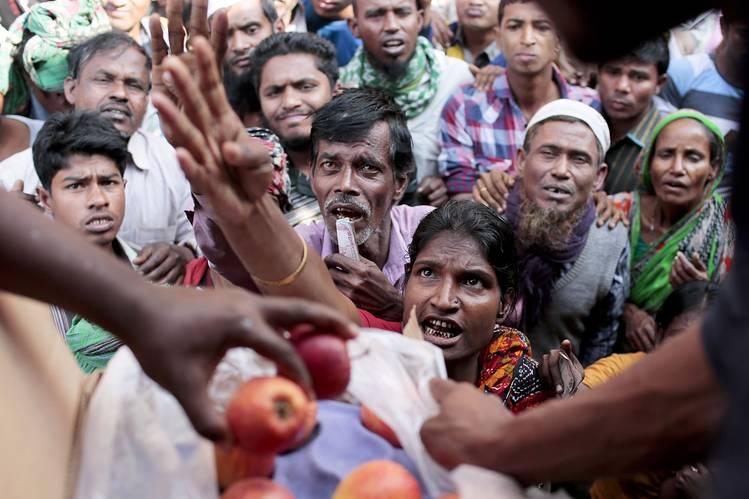 In this Feb. 4, 2015, file photo, Bangladeshis raise their hands for fruit sold during a strike called by the BNP-led alliance in Dhaka. Photo: A.M. Ahad/Associated Press

Adding to the tensions this month, an opposition spokesman and leader of the BNP, Salahuddin Ahmed, was taken from his home by armed men that his family said were police detectives. His wife, Hasina Ahmed, filed a habeas corpus writ in the High Court demanding the police produce her husband before a court. The police, in a written statement submitted to the court, denied holding Mr. Ahmed.

“We’re terrified that he is being held at an undisclosed location and may be physically harmed,” said Ms. Ahmed.

As the government has sought to curb upheaval, local and international rights groups say they see a pattern of deaths among people being held by police or during what security forces describe as “encounters” with people they claim are terrorists or criminals. These deaths, they say, amount to a form of illegal execution.

A former police inspector general, Nurul Huda, declined to speak directly about alleged extrajudicial killings. But, he said, “the demands on the police forces to maintain public order have increased disproportionately due to the current turmoil,” adding: “When the police are overstretched, civil liberties and due process sometimes suffer.”

Wadud Bepari, a 30-year-old labor activist and member of the BNP, died apparently while in police custody in Dhaka.

His father, Abdul Ali Bepari, recalled the phone call he received in the middle of the night recently, bearing the grim news. “Come and get your son from the morgue,” the unknown man on the other end of the line said, according to Mr. Bepari. Then the line went dead.

Police said the younger Mr. Bepari had been detained last month on suspicion of involvement in “terrorist activity” and then, while in custody, was caught in a “crossfire” between police and opposition activists. He was shot at least six times in the chest and back, according to a coroner’s report.

The elder Mr. Bepari said he doesn’t believe the police version of what happened to his son. “He wasn’t involved in any criminal activity,” added the 60-year-old cloth trader.

“Whether these are called crossfire, encounter or by some other name, they are extrajudicial killings,” said Nur Khan, director of investigations at Ain O Salish Kendra, a Bangladeshi civil-rights and legal-aid group.

The group has documented the cases of 37 people it says were killed by security forces in February, often after they had been taken into custody. There were 15 extrajudicial killings in January and 7 in December, the group says.

Bangladesh’s Home Ministry, which oversees the country’s police and security forces, didn’t respond to requests for comment. Last year, responding to a report by U.S.-based Human Rights Watch that called on the country to stop alleged extrajudicial killings, the minister of state for home affairs, Asaduzzaman Khan Kamal, said, “There are no abductions or extrajudicial killings in Bangladesh.”

Abul Bashar, a 32-year-old Jamaat-e-Islami activist, says he has been afraid to spend the night at his home for more than a year, fearing police would kill him if they arrest him.

Mr. Bashar says he is wanted by police on suspicion of participating in firebomb attacks. He denies any involvement in the attacks, which he said happened in his hometown in central Bangladesh while he was in Dhaka. “There’s no law, no protection for us,” he said.

Although he insisted that the opposition movement was still “peaceful”, he feared many activists would gradually be driven underground and would resort to more extreme tactics.

“People have lost friends, brothers and have been driven from their homes,” he said. “They’re getting desperate.”

The lying philistines who have seized Washington

AIRPORT SECURITY MUST BE AT THE TOP OF THE LIST