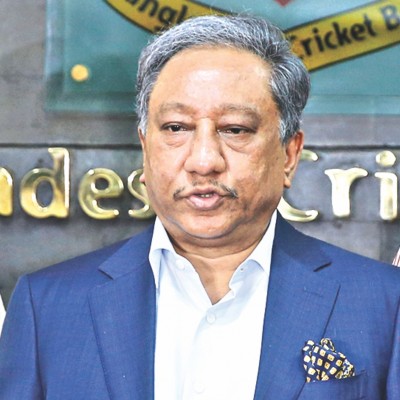 Following a meeting at the Bangladesh Cricket Board (BCB) headquarters in Mirpur yesterday, BCB president Nazmul Hassan announced that all kinds of cricketing activities had been postponed for an indefinite period to help prevent the spread of coronavirus.

The BCB had already postponed the second round of the Dhaka Premier League (DPL) on Monday after its opening round on Monday. That decision came hours after the state minister for youth and sports Zahid Ahsan Russel said through a press release that all sporting activities should be postponed till March 31 after meeting with officials of different federations at the secretariat.

The BCB had observed the situation since then before coming to their decision during yesterday’s meeting.

“As you know, sports all over the world have come to a halt due to the coronavirus outbreak. Our cricket has been stopped too. We postponed the DPL after the first round and back then we had decided to wait for two ways to see how the situation develops. It was an instant decision [to postpone the second round of DPL]. But we sat down today [Thursday] and took the decision that we felt was right,” Hassan said during a press conference yesterday.

“The situation is changing. There was a time when players and the clubs were both willing to play but some of them have a different opinion now. Having watched the situation overall, we have decided to postpone all cricket until further notice. We will monitor the situation and if it improves and we feel like games can be played then we will announce the date of resumption.”

While the BCB boss was reluctant to announce the exact date of resumption, he mentioned that it was not likely to resume before April 15.

“It is very difficult to give a specific date because the situation is changing daily. If we could certainly say that play will resume after March 31 then we would have said that. But we don’t know if the situation will get better or worse by that time. That is why we are not giving any specific dates. We have postponed it for now but I don’t think that there is any possibility of the DPL resuming before April 15. It might even be longer,” continued Hassan.

The gym at the BCB Academy in Mirpur remained almost empty with most players opting to stay at home due to the coronavirus pandemic, although a handful of players like Al-Amin Hossain (L) and Forhad Reza practised individually yesterday. However, following BCB’s directive of ‘no cricket until further notice’, the BCB headquarters may see even fewer players turning up to practice from today. photo: firoz ahmed

A handful of players practiced till yesterday, but Hassan advised players to not go outside and avoid contact with others.

“Even before the start of DPL, we instructed the players to take preventive measures. Even now I will ask them to stay safe, to avoid going outside and to avoid contact with others,” said Hassan, who also did not rule out the possibility of the BCB going under lockdown.

Srinivasan’s days in ICC numbered, as BCCI moves to replace him