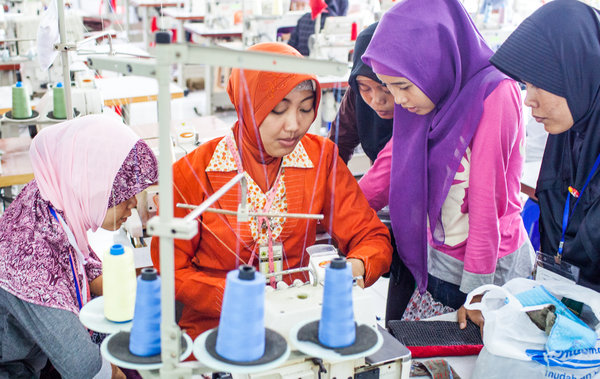 An instructor demonstrated a sewing machine at Indonesia’s national training center for seamstresses, which graduates 12,000 students a year.

Bennett Model helped pioneer the exporting of garments from China in 1975, the year before Mao Zedong died, and ever since, his New York fashion company has searched for other countries, from Guatemala to Vietnam to Indonesia, capable of supplying top retailers like Bergdorf Goodman and Neiman Marcus.

The relentless search for new locations has taken on more urgency after the deadliest industrial accident in the global garment industry’s history, a multistory factory collapse in Bangladesh that left 1,127 people dead. Buying from Bangladesh, said Mr. Model, “has been politically incorrect ever since problems started there, so a lot of major players had already been looking for alternatives.”

When a senior executive from one of the largest American mass-market retailers called him last week with worries about suppliers in Bangladesh and plans for a trip to Vietnam and Cambodia to seek alternatives, Mr. Model was ready with advice: “I told him to add a stop in Indonesia.”

Many Western executives are taking such trips this spring. A lethal factory fire in Bangladesh last November, 33 regional or national strikes there since January, hundreds of deaths in factional street fighting there since February, and the Rana Plaza collapse in late April have left multinational corporations scrambling for other options.

Western executives are checking on potential new suppliers in southern Vietnam, central Cambodia and the hinterlands of Java in Indonesia. Yet safety problems could exist anywhere. The ceiling of a small factory that makes shoes in central Cambodia collapsed on Thursday morning, killing at least two people and injuring nine, three of them severely.

The JW Marriott Hotel in Jakarta, a favorite of Western garment buyers, is nonetheless so full these days that it is hard to book a room on short notice. Indonesian garment executives say they have seen a steady procession of arrivals in recent weeks and months, always asking the same questions about political stability, labor laws, safety compliance and wages.

“At first it was because of China getting too expensive, then came the Bangladesh fire tragedy, and then there have been so many steps in Bangladesh’s troubles,” said Ade Sudradjat, the chairman of the Indonesian Textile Association. “Some buyers feel uncomfortable placing orders in Bangladesh.”

Many multinationals are exploring their options in case street clashes and politically motivated national strikes worsen in Bangladesh, which is the world’s second-largest garment manufacturer after China. A new faction in the country’s Islamist movement has staged more violent protests lately that have sometimes resulted in the temporary closure of factories.

Garment manufacturing makes up a fifth of the economy in Bangladesh and four-fifths of its exports, which means that one of the world’s poorest, most densely populated countries is desperately dependent on continued export orders to stave off soaring unemployment and possibly further political unrest. Some executives say that many multinationals will continue buying from Bangladesh, although some may diversify their orders to more countries.

“People are on the one hand looking at contingency plans in case the unrest gets worse,” said Bruce Rockowitz, the group president and chief executive of Hong Kong-based Li & Fung, one of the world’s largest sourcing companies. “There are some people who want to move completely away from Bangladesh, but there are only a few of them.”

Tessel Pauli, a spokeswoman for the Clean Clothes Campaign, dismissed retailers’ worries about civil unrest as a disingenuous excuse to avoid improving safety standards there. “Political turmoil has been existing in Bangladesh over the last decade,” she said, while adding, “Of course, they should make it clear to the government that bloodily suppressing street demonstrations should stop immediately.”

Dozens of impoverished countries make T-shirts and other very basic clothing. But only a few countries — really just China, Bangladesh, Vietnam, Indonesia and to some extent Cambodia and Pakistan — have developed highly complex systems for producing and shipping tens of thousands or even hundreds of thousands of identical, high-quality shirts, blouses or trousers to a global retailer within several weeks of receiving an order.

The clothing needs to be labeled correctly so that it travels smoothly through a large retailer’s distribution centers and arrives on schedule at each store around the world. The process requires formidable numbers of skilled workers who can oversee quality control as well as labeling and shipping of garments. Big retailers and fashion companies have repeatedly tried and failed to develop alternatives, experimenting in India, Africa and Latin America, only to run into infrastructure bottlenecks and shortages of skilled managers or workers.

Mr. Rockowitz said that all of the potential successors to Bangladesh for very large-scale garment exports were in Asia. Mr. Model said that India was not organized for large-scale, timely production, Africa did not have enough workers with the right skills for high-volume labeling and shipping, and Latin America did not have enough workers interested in operating sewing machines.

Two years ago, Mr. Model spoke enthusiastically about a factory that he had found in Guatemala, which he saw then as an alternative to China and Southeast Asia that was much closer to the United States, which could shorten delivery times.

But Mr. Model said in a telephone interview several days ago that he recently stopped buying from the factory in Guatemala and switched his orders to two factories in Vietnam instead; he also relies on production here in Semarang for knit dresses. In Guatemala, the quality was excellent, he said, but, “They can’t handle big orders and they’re slow on delivery.”

By contrast, Mr. Model said that he had always refused to place orders in Bangladesh for his customers. He said that he and a couple of other suppliers of elite retail chains always worried about Bangladesh’s reliance on high-rise factories, in which workers can be trapped on upper floors during a fire, instead of the single-story and two-story designs found in Southeast Asia.

Indonesia, for example, has had an industry code since the early 1990s that garment factories may not be more than two stories high so evacuation will be easier during fires, volcanic eruptions and earthquakes. Union leaders here say that only a few Indonesian garment factories are taller, because they predate the rule. Even factories with a second floor in Indonesia must make sure that the second floor is open to the first floor with a long balcony or courtyard for easy escape; although there are other labor abuses in Indonesia, local union leaders said that the rule was scrupulously followed.

Rubana Huq, the managing director of the Mohammadi Group, one of the largest garment makers in Bangladesh, said that the prevalence of high-rise factories in Bangladesh reflected the country’s unusually high real estate prices combined with the difficulty of persuading utilities to install electricity and gas connections to larger sites.

What may save Bangladesh from a sharp, immediate drop in export orders is simply that most Southeast Asian factories are already fully booked with orders from multinationals fleeing China’s ever-rising costs. “For this year, it’s impossible — we’re already full,” said Suryadi Sasmita, the president of the Indonesian subsidiary of Wacoal, a big Japanese garment manufacturer.

“There are definitely customers who are looking for more capacity than we can offer them, because they want to move orders out of Bangladesh and out of China,” said Sanjay Kumar Goyal, the chief financial officer of the Busana Apparel Group, a big Jakarta-based manufacturer.

Mr. Rockowitz estimated that even if political violence escalated sharply in Bangladesh, only 10 to 20 percent of its output, or $2 billion to $4 billion a year worth of goods, could be shifted in the next nine months or so to other countries.

Indonesia’s national training center for seamstresses — women make up 98 percent of the students — is here in Semarang, producing 12,000 graduates a year. But even that isn’t enough. Four factories with a combined employment of 30,000 are to open in the next year in Semarang, and many more factories are being built nearby.

Asked how these factories would find workers, Sumidi, the school’s director, shook his head and said he hoped to send instructors to factories to train workers on sewing machines there. (Like many Javanese, he uses only one name.)

Newly opened factories have started competing for scarce seamstresses by offering free meals and free health insurance, said Nurdin Makruf, the vice general secretary of the Semarang chapter of the national union that mainly represents garment workers. Construction companies here are struggling to find enough workers to build all the garment factories now being carved out of the forests of coconut palms, banana trees and conifers that carpet central Java.

“It’s going to take time, but it’s going to eventually filter out all over the place,” he said. “It’ll take two or three years.”

Can Bangladesh be a “role model” for developing nations?