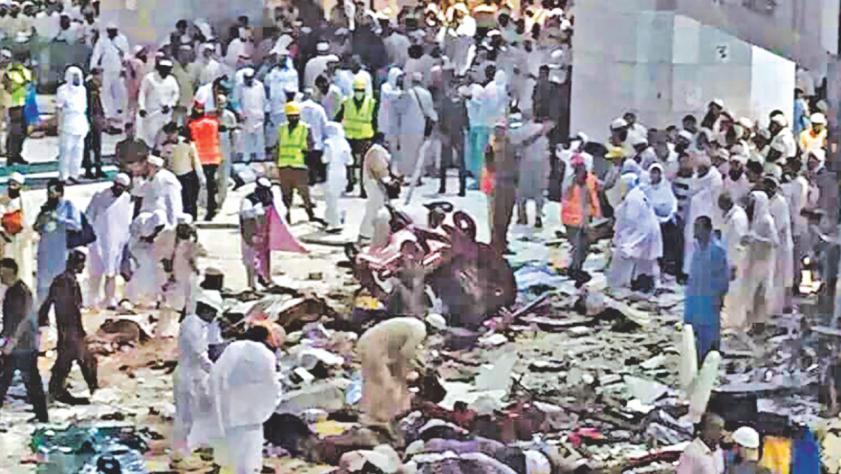 Though no Bangladeshi was killed so far, at least 40 Bangladeshis were injured in the incident, Golam Moshi, Bangladesh ambassador to Saudi Arabia, told The Daily Star around 2:00am today over the phone.

“Three of them, one identified as Chan Mia, were shifted to intensive care unit at a hospital. Their conditions are stable,” he said, quoting doctors.

Some of them received primary treatment, Golam said.

The diplomat said as the injured were saying prayers when the incident took place, they might be hajj pilgrims. “We are yet to get confirmation whether any of them are workers.” The toppled crane leans on the Grand Mosque, with the top section of the vehicle having crashed through the ceiling. Photo: Daily Mail

Saudi Arabia’s civil defence authority said on Twitter that emergency teams were sent to the scene after a crane fell at the Grand Mosque, reports AFP.

That came about an hour after it tweeted that Makkah was “witnessing medium to heavy rains”, with pictures circulating on social media showing lightning.

Authorities were yet to release an official account of what happened.

Pictures of the incident on Twitter showed bloodied bodies strewn across a courtyard where the top part of the crane, which appeared to have bent or snapped, had crashed into the several storey-high building.

A video on YouTube showed people screaming and scurrying around right after a massive crash was heard and as fog engulfed the city.

The incident occurred as hundreds of thousands of Muslims start to gather from all over the world for the annual hajj pilgrimage expected to begin on September 21. Ambulances gather outside the mosque as hundreds of injured people are carried to nearby hospitals. Photo: Daily Mail

The Grand Mosque is usually at its most crowded on Fridays, the Muslim weekly day of prayer.

It houses the Kaaba — the massive cube-shaped structure towards which Muslims worldwide pray.

The governor of Makkah region, Prince Khaled al-Faisal, has ordered an investigation into the incident and was heading to the mosque, the official @makkahregion page on Twitter said.

Meanwhile, online activists created a hashtag on Twitter urging Makkah residents to donate blood at hospitals in the area.

No details were immediately available on the nationalities of the victims.

But Iran’s official IRNA news agency, quoting the head of the Hajj Organisation, said that 15 Iranian pilgrims were among those injured.

Most of them were treated as outpatients, Saeid Ohadi said.

A massive project is currently underway to expand the area of the mosque by 400,000 square metres, allowing it to accommodate up to 2.2 million people at once.

The mosque is surrounded by a number of cranes.

The hajj has largely been incident-free during the past few years, with Saudi Arabia investing billions of dollars in transport and other infrastructure to facilitate the movement of the huge number of people who take part.

The official SPA news agency has said in a statement that already almost 800,000 pilgrims arrived in the kingdom for hajj.

Thirteen killed in Brotherhood clashes with police in Egypt