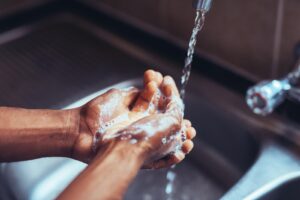 The habit of hand washing has increased in Bangladesh, but over one-fourth of the country’s population do not use soap, revealed a cluster survey of Bangladesh Bureau of Statistics (BBS) published in last December.

BBS conducted the survey with financial and technical assistance of UNICEF.

Around 25 per cent of 64,400 respondents did not have habit or awareness of washing hands, director of BBS Md Masud Alam told Prothom Alo.

The survey was conducted based on direct interviews and observation of places designated for hand washing, he added.

Public health and water experts, however, think that less people have the habit of washing hands following health guidelines than the survey indicated.

Water Aid’s head of programme Aftab Opel thinks that method used in the survey may not always portray the accurate picture.

He said proxy indicators were used in determining people’s habit of washing hands.

In such cases, the mere presence of soap and water in designated places is taken for granted as the indicator of peoples’ washing hands there.

Opel thinks, in reality, more people are not accustomed to washing hands.

International Centre for Diarrhoeal Disease Research, Bangladesh (icddr’b) project director of environmental intervention unit Md Mahbubur Rahman pointed out that respondents should be honest in their answers or the results may not portray the real picture.

He suggests spending four to six hours in observation to know ones habit of hand washing.

Water Aid’s Aftab Opel said there is no hand washing facilities for 10 per cent slum dwellers and floating people in Dhaka city. Widespread campaign for washing hands might create mental pressure for them.

The authorities should in the first place supply hand washing items to them, he added.

The department of public health engineering is responsible for supplying drinking water and ensuring healthy sanitation systems for the people of the country outside city corporation areas.

DPHE’s chief engineer Md Saifur Rahman said around 12 per cent of the 25 per cent is extremely poor. Soap is a luxury for them.

He said food is more pressing need for them than sanitising items. The working class simply buys food when they can earn even Tk 20.

UNICEF is conducting a survey on how to supply sanitising items to those people, he added.

Local government minister Md Tajul Islam, however, thinks that lack of awareness is more to blame than poverty.

“I don’t deny issue of poverty. But there is a lack of awareness among the people who are well-off. We are now working on awareness building among the masses,” the minister said.