At a Hanukkah celebration in the White House Wednesday, President Donald Trump signed an executive order aimed at suppressing criticism of the Israeli government on college campuses across the United States.

The action is targeted in particular at squelching the First Amendment rights of US-based students, professors and other activists involved in the pro-Palestinian Boycott, Divestment and Sanctions (BDS) movement, by classifying opposition to the policies of the state of Israel as anti-Semitism. 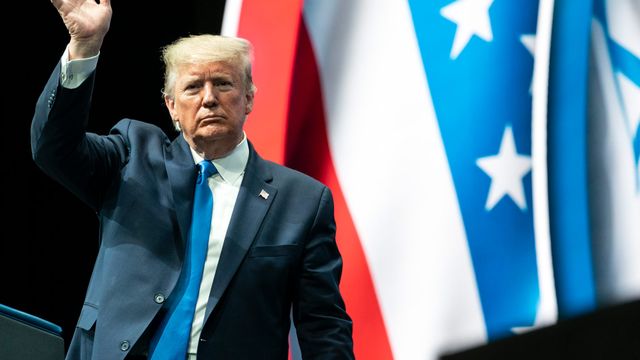 Trump’s order expands the federal government’s interpretation of Title VI of the Civil Rights Act of 1964, which prohibits funding to institutions which discriminate or allow discrimination on the basis of race, color and national origin, to include anti-Semitism.

Trump declared that his order makes clear that Title VI “prohibits the funding of institutions which traffic in anti-Semitic hate.” He went on to proclaim that if publicly funded universities “want to accept the tremendous amount of federal dollars you get every year you must reject anti-Semitism.”

The president boasted of his tremendous support for Israel as proof of his support for Jews, citing his decisions to move the US embassy to Jerusalem, recognize Israel’s control over the disputed Golan Heights and tear up the Iran nuclear deal negotiated by the Obama administration.

While he didn’t specify which institutions were targeted by the order, he did explicitly call out the BDS movement, whose supporters seek to pressure Israel through protests and lobbying into ending its occupation of the West Bank, grant full equality for Arab-Palestinian citizens of Israel and recognize the right of return for Palestinian refugees. Leaders of the BDS movement have been blocked from entering Israel and supporters are routinely smeared as anti-Semites simply for advocating on behalf of the Palestinian people.

Replying to early reports, the Trump administration was at pains to insist that this stretching of the scope of anti-discrimination measures was not meant to redefine Jews as a nationality or race, itself a vile anti-Jewish trope deployed by the Nazis, the Ku Klux Klan and other anti-Semites.

“The executive order does not define Jews as a nationality,” Trump’s son-in-law and White House adviser Jared Kushner wrote in an op-ed in the New York Times Wednesday. “It merely says that to the extent that Jews are discriminated against for ethnic, racial or national characteristics, they are entitled to protection by the anti-discrimination law.”

The IHRA definition describes criticism of Israel as anti-Semitism, listing a number of examples, including the description of the establishment of the state of Israel as a “racist endeavor” due to the expulsion of the Palestinian citizens who were already living in the region, or comparing “contemporary Israeli policy to that of the Nazis” in establishing an apartheid regime which confines Palestinians living in the West Bank and Gaza Strip.

The effort to expand the definition of anti-Semitism to include criticism of Israel is supported by Democrats and Republicans alike. According to the New York Times , the initiative for the executive order came from David Krone, who had served as chief of staff for Senator Harry Reid when he led Democrats in the Senate.

Reid had helped shepherd through the Senate a bill which would have written into law similar standards, the Anti-Semitism Awareness Act of 2016, but it ultimately died in the House. Krone successfully lobbied Kushner, who had been a Democrat until 2015, for the order to be drafted by the White House and signed by Trump.

Among those welcomed by Trump on the platform was Harvard law professor Alan Dershowitz, a Democrat, who proclaimed that the executive order would “turn universities from being bastions of discrimination and hatred” and “go down in history as one of the most important events in the 2,000-year battle against anti-Semitism.” Other Democrats on the platform behind Trump as he signed the order were Representatives Max Rose from New York, Elaine Luria from Virginia and Josh Gottheimer of New Jersey.

One of Trump’s favorite far-right evangelical ministers, Robert Jeffress, was also given time to speak, assuring those assembled that God would “bless those who bless Israel and curse those who curse Israel” and the president was on the “right side of God.” Evangelicals are fervently pro-Israel, not due to their love for Jews, but because they believe that the establishment of a Jewish state in the Middle East will help usher in the second coming of Christ. In fact, Jeffress, who spoke at the dedication of the US embassy in Jerusalem, has declared that Jews as well as Muslims, Hindus and Mormons are all condemned to an eternal punishment in hellfire.

For his part, Trump has repeatedly made appeals to far-right anti-Semites, something which is not incompatible with appeals to far-right Zionists. His fascist adviser on immigration policy, Stephen Miller, is Jewish. Early on in his presidency Trump declared that the neo-Nazis who rioted in Charlottesville, Virginia, killing one protester, were “good people.” Who hired RAB: Shamim or Nur?

Highest ever extrajudicial killings in 2018: ASK