Women in South Asian politics have not empowered women

Despite many prominent female politicians, a big sex divide endures 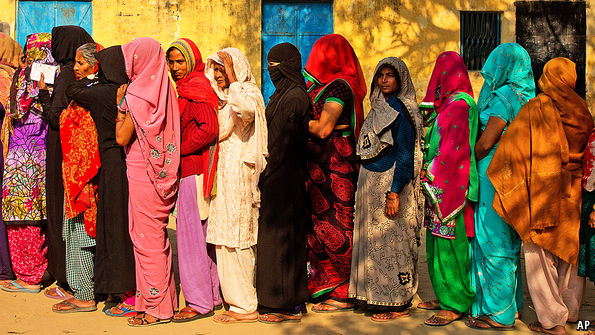 ON THE Indian subcontinent, as in no other part of the world, women have risen to the pinnacle of politics. Indira Gandhi of India, Benazir Bhutto of Pakistan and Aung San Suu Kyi of Myanmar are all famous names. Less well known is that Sri Lanka was the first country ever to elect a woman prime minister, or that it has also had a female president. For 22 of the past 25 years Bangladesh, a largely Muslim country with more people than France and Germany combined, has been led by a woman. And the chief ministers of numerous country-sized Indian states, from West Bengal in the east to Tamil Nadu in the south, have also been women. India’s democracy is not pretty; these are the winners of bare-knuckle contests.

Yet for all such headline-grabbing successes, the fine print tells a different story. Although there has been steady progress in such things as stamping out female infanticide and spreading women’s education, statistics continue to reveal a stark sex divide. At 27%, the share of Indian women who work, for instance, is less than half the level in China or Brazil (and also in neighbouring Bangladesh, although slightly higher than in Pakistan).

In 2012 a household survey found that four-fifths of Indian women needed their husband’s or family’s permission to visit a local clinic. A third said they would not be able to go alone. More than half also said they could not visit a shop, or even a friend, without someone else’s approval. For many, the very idea of going out was alarming: 70% said they would feel unsafe working away from home, and 52% thought it normal for a husband to beat his wife if she ventured out without telling him. In November, following a shock government move to scrap higher-denomination banknotes, a domestic violence hotline in the city of Bhopal in central India registered a doubling of calls, largely from women whose spouses had discovered they had secretly been saving cash.

For wealthy and middle-class Indian women, freedoms have steadily grown: Anubha Bhonsle, a television anchor, recalls the strangeness of being the sole female driver of a motor scooter on many streets when she started commuting 15 years ago. “No one would give a second glance now,” she says. Yet in many professions women remain rarities. Barely 10% of the 700 judges in India’s higher courts are female, and only 17% of the 5,000 officers in the Indian Administrative Service, the elite corps of bureaucrats that runs the country.

Women are scarce even in politics. In the lower house of India’s parliament only 12% of MPs are women. State legislatures are similarly male. True, women’s share of seats has risen, but slowly: 50 years ago the proportion of women in the lower house was 6%.

It is only in village and district councils that women hold much sway, but this is partly due to laws that assign either a third or half of seats to female candidates. Earlier this month tribesmen objecting to efforts to impose a women’s quota in local elections rioted in Nagaland, a state on the border with Myanmar that is one of the few exceptions to such rules. Naga men insist that local custom precludes female village chiefs.

Such troubles reveal one cause of slow progress to sexual equality: Indian politicians have generally found it more rewarding to cater to subgroups defined by caste, religion, ethnicity, language or local grievance, rather than to broader categories such as women. This is equally true of female politicians, and of regional leaders less constrained by democracy. Sheikh Hasina, the current, iron-fisted prime minister of Bangladesh, has recently moved to reduce the legal age of marriage from 18 to 16. Given that child marriage is already common, especially in the impoverished countryside, women’s-rights activists are upset. But analysts explain that apa, or “big sister”, who has hounded opposition parties including Islamists, is looking for ways to deflect conservative anger.

In order to succeed female politicians in the region often make a point of acting tough. Mamata Banerjee, the diminutive but formidable chief minister of West Bengal, once dragged a male colleague out of the well of parliament by the collar when she was an MP in Delhi. Like Sheikh Hasina and Mayawati, a former chief minister of Uttar Pradesh, as well as Jayalalithaa, a recently deceased former film star and long-serving chief minister of Tamil Nadu, Ms Banerjee has carefully repressed her sexuality. These women are ostentatiously “married” to their cause or their party.

Such care is understandable. Male rivals have not shied from using sex to malign female politicians. One party leader in Uttar Pradesh lost his job for accusing Mayawati, who comes from a downtrodden caste, of “selling tickets like a prostitute”. A colleague went further against Sonia Gandhi, the leader of the opposition Congress party. Absurdly, he accused the head of the Gandhi dynasty of having worked for a Pakistani escort agency.

With so many obstacles blocking the path to power, it is hardly surprising that so many of the region’s successful female politicians got a head start. Amrita Basu of Amherst College finds that more than half of India’s female MPs in the past decade had family members who preceded them in politics. Quite often such dynastic links have been dramatic. Ms Suu Kyi in Myanmar and Sheikh Hasina are both daughters of slain independence heroes. Sonia Gandhi and Khaleda Zia, a former Bangladeshi prime minister and bitter rival to Sheikh Hasina, are both widows of assassinated leaders. Both Jayalalithaa and Mayawati entered politics as devoted lieutenants to charismatic, populist politicians; in Jayalalithaa’s case her mentor also played the lead in many of her films.

For women to play a more normal political role in the subcontinent, perhaps it is in films, and in popular culture in general, that change needs to happen first. All too often on the region’s screens, actresses who are paid a fraction of what male stars get portray women who lack agency in their lives. There is, though, an inkling of change. This season’s blockbuster and already the highest-earning film in Bollywood history, “Dangal”, tells the heart-warming story of sisters who become champions in the male-dominated sport of wrestling. Yet the main hero is not one of the girls, but the father, a former wrestler, who bends them to his will.